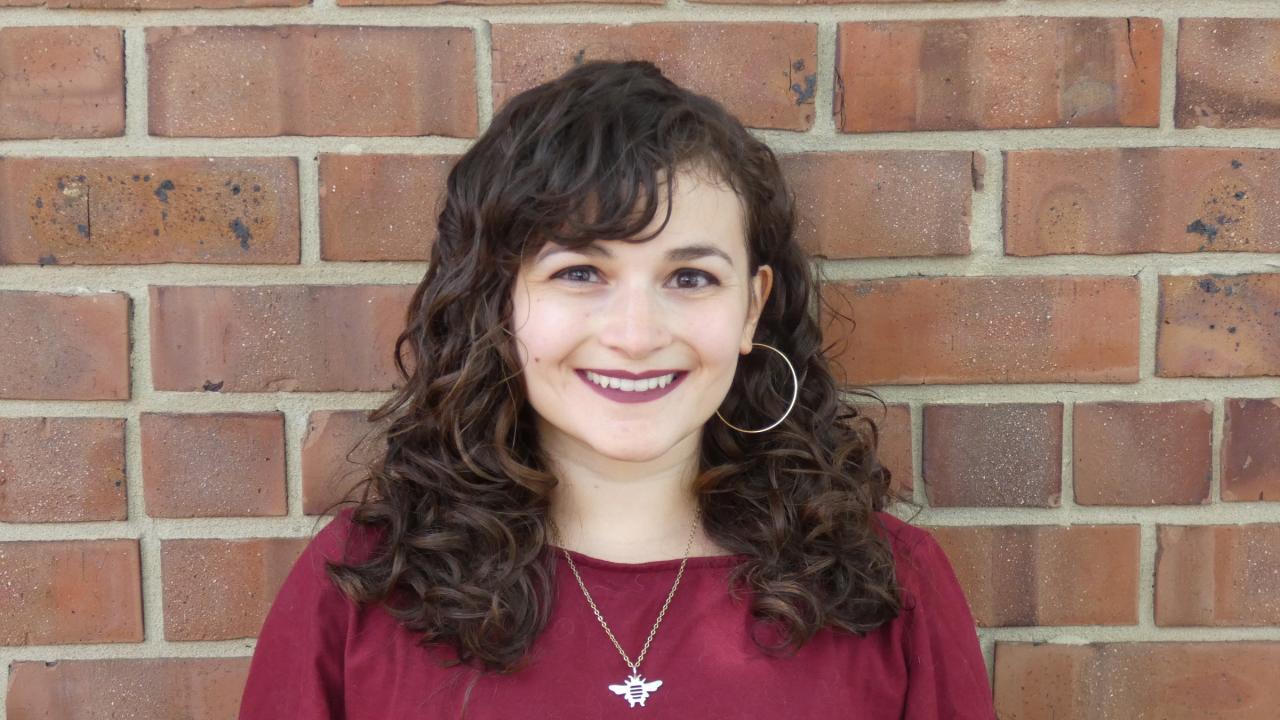 The Classics Program is delighted to announce the appointment of Kathleen Cruz as Assistant Professor of Classics.

Professor Cruz arrives at UCD from Princeton University, where she completed her PhD thesis entitled "The Poetics of Horror in Lucan's Bellum Civile and Statius' Thebaid." It may be some time before students can meet Professor Cruz in person, so in the meantime we offer a brief Q&A by way of virtual introduction:

I’ve always been interested in the intersection between history and myth and the way one often turns into the other. Maybe this interest was partially sparked by being from a family that, like many others, has its own weird legendary genealogy. My grandmother, who grew up in Puerto Rico, used to assert that our family was descended from Juan Ponce de León to explain why most of us are very short and look younger than our age - so, Ponce de León did, in fact, find the fountain of youth, and we’re the result! To me, this story is clearly ahistorical (and I’m very happy not to be related to Ponce de León), but my grandmother used to take photos at his house in San Juan when she visited the island. What was myth for me was closer to history for her.

I first began looking into ancient Greece and Rome as a student specifically because I noticed but didn’t understand references to them in other media I was enjoying at the time. What I ended up reading really spoke to that interest in history and myth. On one hand, I was especially drawn to the way that so many ancient texts reinterpret the same mythic material to work through and at times even manipulate historical events. On the other, I noticed a similar tension in the way many different cultures have sought to identify themselves as inheritors of ancient Greece and Rome. This especially intrigued me because as I began to pick up on this dynamic all around me, I realized that, as a Puerto Rican person, I hadn’t ever really felt such a claim myself. This duality is something that drew me in as a student, and which I still appreciate about my work now – when working in Classics, I get to investigate questions that interest me about the ancient world, but there’s also an opportunity and responsibility to understand the long legacy of the pursuit of those questions.

What is your favorite weird fact that most people don’t know about the ancient world?

An interesting fact about ancient Rome that comes to mind is that drinking gladiator blood was a popular cure for certain diseases. Pliny talks about this in his Natural History, and it also comes up in medical writers like Celsus and Scribonius Largus. I always think about this when watching a movie featuring gladiators, since this detail never makes it in for some reason…Before we think it too weird, though, we should keep in mind that a similar practice continued until the early 1900s in Europe!

What is your favorite weird fact that most people don’t know about you (*and you are willing to share)?

Even though I work on literature, I have, in fact, been on exactly one archaeological dig in my life. The potentially weird part of this is that the site was located not in the Mediterranean, as one might expect for someone with my background, but on the small Danish island of Alrø. The team originally thought that we were investigating a Viking market area (I was a Medieval Studies minor in college), but over the few weeks we dug there, we found maybe three horse teeth and two tiny fragments of pottery. At the end of the dig, the team figured out that the actual marketplace was a mile or so away from our spot. Just tragic.

What course(s) are you most looking forward to teaching at UC Davis?

I’m definitely looking forward to teaching “Greek & Latin Elements in English Vocabulary” (CLA 030). In a past life, I studied Old Norse, which also had a strong influence on English’s development. I really enjoy talking to students about how the footprints of different languages have been received in our own conception of English, and it’s an interesting way to think about different legacies of ancient vs. medieval cultures in something we’re all using day to day.

I’m also excited to talk to students and see if there’s interest in a course on ancient magic, which can really reframe how we think about the ancient world. Most of us, I think, don’t imagine Greeks and Romans walking around wearing magic amulets to keep their bodies in proper alignment or burying small dolls with pins in them so that they can win a court case!

It would also be interesting to offer a class on classical reception to bridge some ancient and modern questions. There are some really evocative adaptations of ancient drama that have been written and put on by Latinx writers, for example, which address important contemporary concerns.

You study the intersection of film and latin epic, what movies do you recommend for budding Classicists?

This is a tricky question, I think, because there are so many different ways film can be really instructive for classicists. The first film that comes to mind is the 1932 The Mummy, directed by Karl Freund and starring Boris Karloff. This sounds like a really weird choice, but hear me out! I first watched The Mummy in an undergraduate course on Greek perceptions of Egypt, and what I found then and still find useful about the film is that it very concisely illustrates many of the challenges of studying Classics. The film explicitly, and in my view very unexpectedly for the time, advocates against archaeologists taking artifacts away from their country of origin for display in their own museums – one of the major arguments of the movie is that European and American archaeologists should not abscond with another country’s historical and cultural objects. But the film itself makes this really important and ethical argument at the same time as it exoticizes both elements of Egyptian cultural history (the titular mummy being a long-lasting example) and Egypt itself, ignorantly imagining it as a locale of ancient supernatural powers.

When we study Classics, there is at times a similar tension underlying the work we do. We study the ancient Mediterranean with the goal of understanding its many distinct cultures in a way that is both academically responsible and ethically sound, but many of the resources that we do this work with can be fraught – to take the movie’s example, we may benefit intellectually from a visit to a museum but then run into a moral problem when we ask how it collected its objects. A film like The Mummy can push classicists to think critically about the history of the work we do and the materials we do it with.

I’m also a big advocate for classicists seeing any popular film on the ancient world – like the oft-maligned Gladiator, for example, or Troy – not because I particularly like them as films, but because they tell you a lot about what Classics means to many people. I think we have a pretty unique responsibility to be aware of how the ancient Mediterranean is being used to attract mass appeal. This helps us understand our own position as classicists, I think, and the ways in which we want to support or work against the vision of the ancient world that films like these represent.

If you want to check out the ways in which film can successfully add different nuances to ancient material, Michael Cacoyannis’ Iphigenia (1977) is my sincerest recommendation. Oh, and if they ever release a film adaptation of Anaïs Mitchell’s Hadestown musical, every classicist should rush to buy a ticket!

What can you do with a major in CLASSICS?